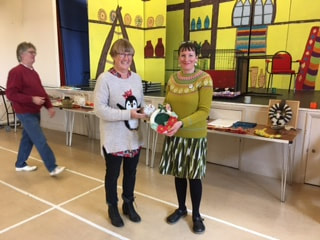 Caroline Stone with her Xmas Wreath 2019
NEWSLETTER NO: 242                                                    JANUARY 2017
CHAIR’S LETTER
Happy New Year to you all
We all know what the word ‘NEW’ means, especially in the phrase above – A Happy New Year; the beginning of another set of twelve months.
A ‘NEW’ chapter, be it in a book or in life, a ‘NEW’ car, a ‘NEW’ television, a ‘NEW’ baby - you get the idea; but, in today’s world and the internet, with all its emocions (emojos, funny symbols you put in an email to relate to feelings) and text speak (GR8 for great), NEW doesn’t mean any of the above. No, NEW means....CLUELESS!
So... A Happy Clueless Year
But I’m being silly. Of course no-one is going to wish anyone else a Happy Clueless Year, it sounds ridiculous. I’ve just bought a clueless television, a clueless car and who comes up with these new (sorry) clueless meanings to words?
Why am I rattling on about New / Clueless? Because to a certain extent this can relate to us. Are we not clueless about something new until we have mastered the art? This is where workshops can be so important for experts to come along and impart their teachings. We had some lovely workshops last year which many of you attended; it would be lovely to see some of your work from them, even if they are still works in progress.
I was sorry to hear of the passing of two stalwarts of the Guild, Doreen & Elaine. They both served on Committee with Doreen taking the Chair when the Guild was in dire need and Elaine always chivvying people on.
I’m equally pleased to welcome our youngest member to the Guild (to be) - Evelyn Anne Denham-Ball, daughter to our own little Charly and her husband Chris. Congratulations to you both. I shall look forward to seeing her blossom as a spinner and weaver.
We have a full and exciting programme this year and you have a new (not going there) Programme Secretary – Margaret Hinch. Any ideas for possible future meetings from 2018 onwards, please let her know.
Although the Guild will be relatively quiet this year, as we did such a lot last year, we are not being idle. The Spinning Foundation Courses are still proceeding and are now joined by the Weaving Foundation Course, which started at the beginning of Jan and was, shall we say, a ‘’full & tiring’’ day.
In this issue you have your AGM Papers, please do not lose them, and the Treasurer has asked me to let you know that you need to be a fully paid up member to vote and to make a Proposal at the AGM.                                                                                                                       Bob Durrant


About Wool – Jacob
History
The Jacob sheep is the only known sheep to be mentioned in the Bible – The Old Testament Book of Genesis where it tells how Jacob became a wealthy and selective breeder. Even back in those days’ farmers seemed to understand the genetics of animals and how to breed for improvement.
The bible will tell us that, through some turbulent times, Jacob eventually settles in Egypt with his family and sheep, and, as such, the flock would have travelled from Palestine to Egypt.
Over time Jacob sheep were to be found in Spain having travelled up the coast via North Africa & Morocco. During the 17th & 18th C the British landed gentry imported flocks from Spain and the oldest known flock, having been imported back in the 1750’s and placed at Charlecote Park in Warwickshire, still have descendants that graze the park.
After the First World War, flocks and numbers had dwindled to the point where there were very few around. In 1969 the Jacob Sheep Society was formed, so, with 96 members and 2,700 registered sheep, this small band of farmers and enthusiasts were determined to keep this breed alive.
Wool qualities
*The fleece is of a medium quality, white with
well-defined black patches
*It’s light, soft, springy and open with little lanolin
*Varies in crimp and fineness
*There should be little or no kemp
*Staple Length 75mm to 18Omm (3' to 7)
*Average weight of fleece 2 - 3 kgs (4 - 6 Ibs)
*Fibre diameter is usually 27.5 to 30 microns,
with a Bradford count of 46s to 58s.
The Jacob is a reasonable easy to handle breed and both sexes can carry either 2 or 4 horns. It has a naturally coloured fleece ranging from cream through to black or brown and can vary enormously from having a little bit of brown to being almost all over brown.
The fleece from a Jacob is a good all-rounder, with a medium length staple, is ideal for a beginner spinner to learn with and, with the varying colours in one fleece, lends itself to a very diverse and pleasing yarn.

SILK – Bev Heard
The Silk Road is the modern term for a network of routes linking China and India with Europe from about the end of the 2nd century BC until the 15th century AD. Silk was one of the main luxuries traded along these routes and led to close cultural contacts between the peoples stretched along their length.
The romantic name ‘The Silk Road’ was only coined in 1877. It applies to a series of routes across Central Asia to Europe where traders passed raw silk, paper, spices, jade and other goods from one to another along its length. Spurs developed to India along which early Buddhist culture travelled. Han Dynasty emperors (206BC-220AD) and their ancestors used silk defensively in NW China to bribe raiding nomads and trade horses for their empire. By 138AD envoys travelled almost to the borders of Europe, opening a trade through Byzantium to the Roman Empire and spreading silk goods throughout Europe by the 8th century.

‘Yakety-Yak’ – a Trip to Outer Mongolia in Summer 2016  -  Jane Hampton
Sandwiched between Russia to the North and China to the East and South, Mongolia is a remote and massive land and is the least populated country on earth.
We rode with the nomadic herders who are fearsome on horseback.
The horses are close descendants of the Prewalski horse and stand at only 13 hands high, yet they can gallop for miles and would outrun most top thoroughbred racehorses. Luckily, we were offered adapted saddles and not the traditional wooden saddles, embossed with silver ornaments which the Mongolians rode on standing up in the stirrups and sometimes hanging down to the ground to demonstrate how you would scoop up a lamb or kid and tuck them in the front of the traditional  robe, the deel. All this was performed at the gallop, which seemed to be the only other pace after a bit of quiet walking on the way to the well to give the animals their drink of the morning.
The herders were keen to offer us hospitality, sitting in a gher- which you have to enter with your right foot. We were offered fermented mare's milk- their summer seasonal drink and this was followed with a strong vodka 'chaser' downed in one. It would have been discourteous to have refused, but the gallop back to our camp was a little wobbly.
Livestock in Mongolia is prized, with a huge certificate from the local dignitaries when you achieve 1000 beasts. The pecking order goes like this - camels, horses, cows, sheep then goats. Poor old goats. There are also herds of Yaks- they must count as 'sort of' cattle’.
The camels are two humped dromedaries, used for both pack and cart pulling and also for riding, but they are not used for both purposes. We learnt to be very careful when trekking out of our tents at night in the pitch dark to find the hole in the ground loo, not to bump into a grumpy camel who was let free to graze before being brought back to camp in the morning.
Sadly, we saw very little use of raw fibres of camel, yak and sheep's wool. The ghers used to have insulating layers of felted yak and yak skins, but this has been overtaken by imported felt, mass produced in Russia and China.
We did manage to persuade our guide to take us to the capital -Ulaanbaatar's outside market- actually called the Black Market. There we found horse ropes made of braided sheep and yak fibre and saw the influence of the neighbouring countries in the clothing- which was made of some cotton, but much of it silk, used to make mandarin style silk shirts and jackets. We found a gem of a little gher, perched on a pavement, where the owner sold high quality yak fibre, fine knitted shawls and camel fibre socks. Much easier than wondering how to comb camel down from a rather cross, spitting camel.
We plan to return next year to see the eagle flying competitions in the western mountains and the Festival of the Yak. Who knows, we may even discover some people still producing their own hand spun and felted goods.